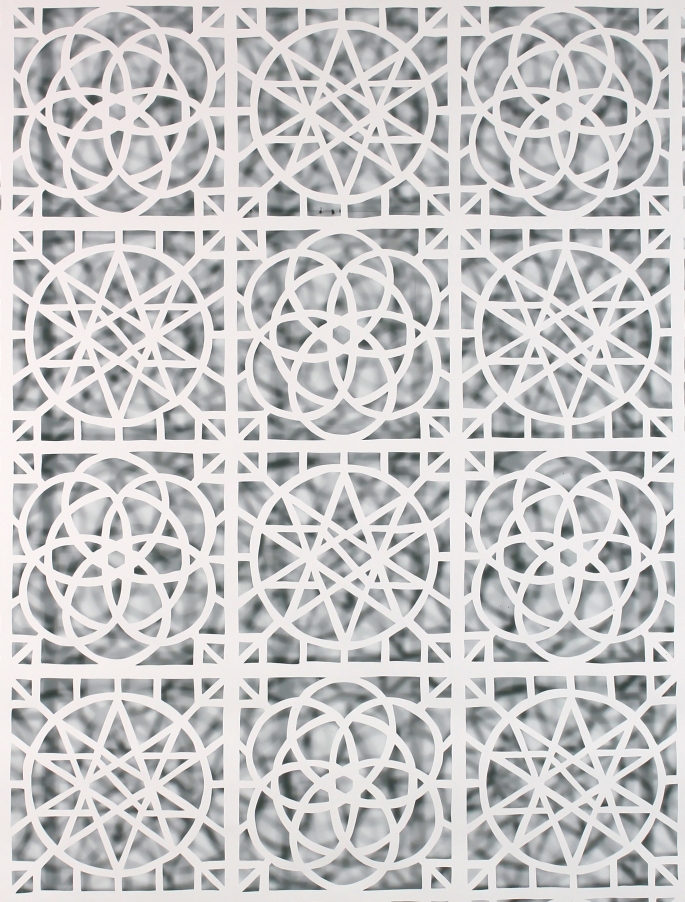 Geometric Aljamia: A Cultural Transliteration will be on display at the Helen E. Copeland Gallery from February 27th – April 4th, 2017.   A public reception will be held on March 30th from 6:30 – 8:30, after a lecture by Nada Shabout.  Refreshments and food will be provided.  For more information about the reception and associated events in the Islamic Cultural Celebration, please click here.

Geometric Aljamia: A Cultural Transliteration is a cross-cultural collaboration that addresses how connections between the Middle East and the West during the Golden Age of Islamic Civilization continue to be relevant and vibrant in the twenty-first century. The project includes artists, designers, performers, and writers from Afghanistan, Qatar, United Arab Emirates, Canada, and the United States.   Aljamía is a medieval Spanish word that refers to Romance languages written in Arabic script. The resulting transliteration contributed to the dissemination of the Arabic language and Islamic influences throughout the Iberian Peninsula and beyond. By understanding the arts as a transliteration of one form of thinking to another and addressing the fundamental patterns and geometry embedded in visual art and poetry, this project revisits the ongoing impact of Islamic art, science, and philosophy throughout the world today.

By addressing the fundamental geometry embedded in two-dimensional art, this exhibition acknowledges hybrid connections between Europe, the Mediterranean basin, and the Middle East.   In the past, aljamia played a significant role in preserving Islam and the Arabic language in the West.  By understanding the visual arts as a transliteration of one form of thinking to another, this exhibition revisits the ongoing impact of Islamic art, science, and philosophy throughout the world today.

Since ancient times, geometric perfection (circle, square, and triangle) has been thought to convey sacred and universal truths by reflecting the fractal interconnections of the natural world. One finds these similarities across cultures embedded in many diverse ethnic patterns. Incorporating these patterns into works of art promotes access through recognition and this commonality creates a connection. Geometric ornamentation may have reached a pinnacle in the Islamic world, where it has been assimilated into all aspects of everyday life.  The exhibition examines an extended cross-cultural integration of the arts into life.

The paper cut installations of Amin, Gower, and Korchi use sacred geometry to blend subtle imperfection with structured repetition.  Townsend is inspired by Koran Illumination Tehzip patterns in the Ottoman style for her wall tracings and paper cut while Sahebzada draws upon the Behzad School of Illumination for his calligraphic wall tracing.  Benitez uses linear perspective as a metaphor for Western Civilization. Their shared artistic and intellectual interests speak to the larger hybrid relationship that the West shares with the Middle East, and especially with the Golden Age of Islamic Civilization.

This exhibition evolved out of a workshop conducted by Gower and Benitez during the 2013 Tasmeem Conference, which was organized by Virginia Commonwealth University (VCUQ) School of the Arts in Doha, Qatar.