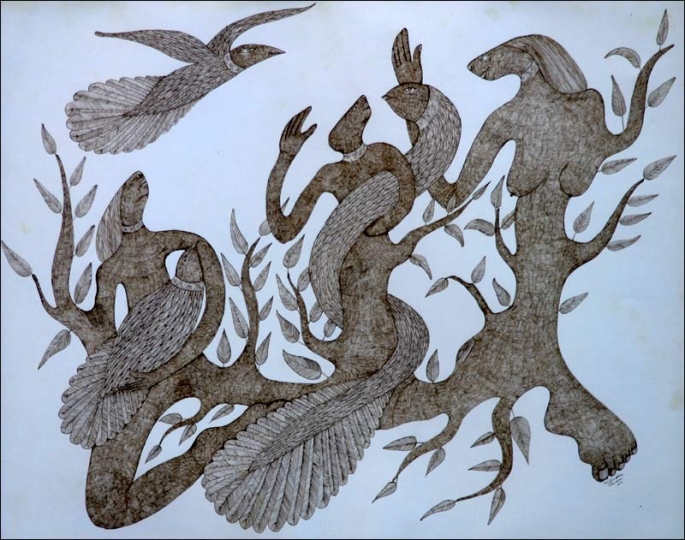 These works are on loan from local printmaker, Richard Nelson.  Since there is little information about Saladi, Nelson was asked if he had any stories or anecdotes about Saladi.  The following was his response, via email:

Through my connection with the Printmaking Workshop in New York City and friendship with Bob Blackburn, the Director, I was invited to run the print workshop in Asilah, Morocco in the summer of both 1984 and 1985. This was part of an annual Afro/Arab conference the Moroccan government would host that included political forums, art, and music. There would be about twenty artists from around the world invited, as well as some of the prominent Moroccan ones to have some kind of interaction.  We were all housed in an old Portuguese palace in the middle of the old walled city of Asilah.

I cannot quite remember how or why we hit it off, but Saladi and I became friends and corresponded well after we both quit attending the festival. At the time he was kind of an “outsider” artist. The Moussem was run by a friend of the King’s –Mohammed Benaissa– who was the Minister of Culture — and they did not want any political monkey business going on. Saladi was certainly not dangerous, but he was outside of the mainstream of artists that wanted to go to cocktail parties and participate in “what is art” roundtables.  Most of the the artists attending these Mouseems were just there for some kind of exotic vacation so barely even showed up at the print studio.

I have never been much of artist but always enjoyed printmaking and making new friends — so somehow Saladi and I ended up spending the days together working: I would make his hard ground plates for him and he would sit working while I printed ones he had completed or worked on my own stuff.  He would spend the whole time talking — explaining his imagery to me or the meanings of Sufism, or his current condition.  I was a happy go lucky listener, so we made a good team.  I did get a couple of lectures though from upper management on how not to get too involved with him because he was crazy, etc. but luckily I was young enough to still question who was crazier: someone who sat around and did artwork all day or someone who sat through all those “intellectual” political discussions with people they did not know or like.  Anyway, I ended up visiting him in his home – -I think it was in Casablanca, I can’t really remember — a couple of times.  It was government provided housing (one or two rooms in the middle of 500 others) and he took me on a tour of the city, out to eat, etc. and showed me a good time.

I ended up trading some pieces with him. He gave me a lot and I ended up sending him money on a monthly basis for a couple of years to help with his daily expenses.  I would count him as a good friend.

Please let me know if you have any specific questions but one of my faults has been not remembering or documenting my earlier life so well. I always thought spending time living it was more important than keeping a record, but now that I am getting older and losing my memory, it might not have always been the right choice.